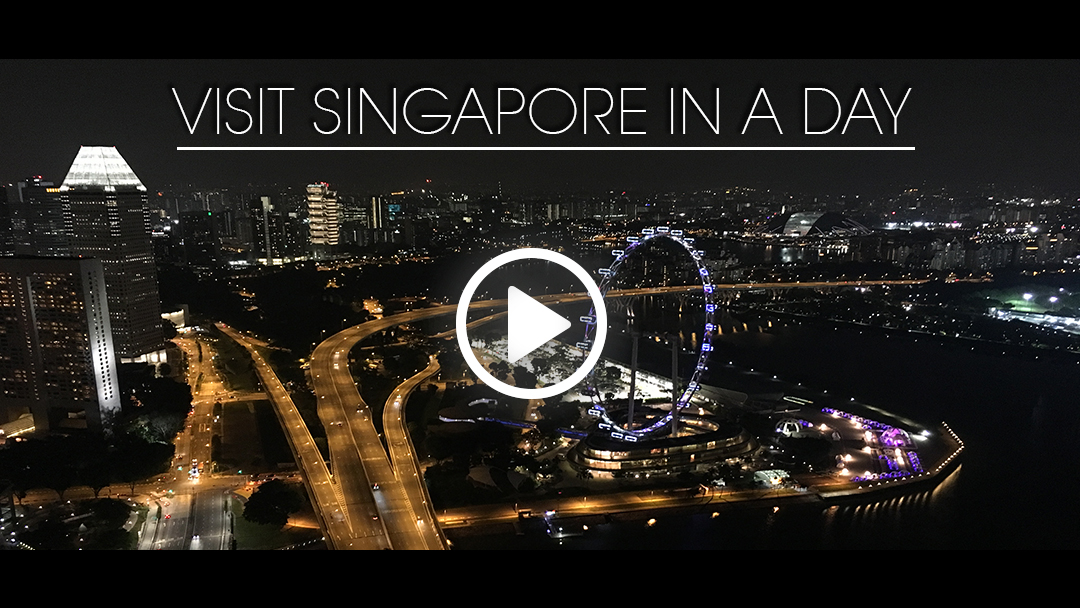 You have only a day to visit Singapore ? Check out this video taking you through its main landmarks. From the office and hotel skyscrapers surrounding Merlion Park to the vibrant night life at Clarke Quay, experiencing peace around the China Town and the grandeur of Diwali celebrations in Singapore’s Little India, travelling in Singapore is like discovering multiple countries & cultures at once​. ​

Merlion Park – Half-fish and half-lion, the iconic Merlion resides at the waterfront Merlion Park. The body symbolises Singapore’s humble beginnings as a fishing village when it was called Temasek, meaning ‘sea town’ in Old Javanese. Its head represents Singapore’s original name, Simhapura, or ‘lion city’ in Sanskrit and later Singapura in Malay. Built by local craftsman Lim Nang Seng, it was unveiled in 1972, by then Prime Minister Lee Kuan Yew at the mouth of the Singapore River, to welcome all visitors to Singapore.

Buddha Tooth Relic Temple & Museum – The Buddha Tooth Relic Temple & Museum located in the Chinatown district was built in 2007, but the temple’s richly designed interiors and comprehensive exhibits on Buddhist art and history tell stories of culture over hundreds of years old. The temple gets its name from what the Buddhists regard as the left canine tooth of Buddha, which was recovered from his funeral pyre in Kushinagar in India. The Buddhist Culture Museum on the third floor holds an array of revered artefacts of the Buddha, such as bone and tongue relics, and the Sacred Light Hall on the fourth floor contains the temple’s centrepiece. The Buddha Tooth Relic is housed in a giant stupa weighing 3500 kg and made from 320 kg of gold, of which 234 kilograms were donated by devotees. You’ll have to see the tooth relic from the public viewing area, as only monks are allowed into the relic chamber.

Sri Mariamman Temple – The bustling Chinatown is also home to the oldest Hindu temple in Singapore, the Sri Mariamman Temple. Dating back to 1827, the temple was known as Mariamman Kovil or Kling Street Temple, and built by immigrants from the Nagapattinam and Cuddalore districts in southern India. It is dedicated to the goddess Mariamman, known for her power to cure illnesses and diseases. Now a national monument, much of the present structure is believed to have been built in 1862-63 by Indian craftsmen. Besides worship, the temple also served as an important place for community activities during the colonial era. More so, because at that time, the temple was the only place authorised to solemnise Hindu marriages.

Clarke Quay – Wondering where to drink in Singapore? You’ll be hard-pressed to find a place that has more options than Clarke Quay and Boat Quay – two of the city’s most lively nightlife spots. From the iconic dance clubs to live music venues and rooftop bars, this ultimate guide to drinking and partying in both Clarke Quay and Boat Quay is a must-have for anyone looking to have a good time in the city, with generous gulps of various beverages.

This site uses Akismet to reduce spam. Learn how your comment data is processed.

My Playlist (Free copyright music for my visitors)